It’s hard to imagine it now but on March 1, 1994, ABC aired the highly controversial episode of Roseanne in which Roseanne Barr kissed Mariel Hemingway. Eight days later, ABC launched These Friends of Mine, starring Ellen DeGeneres, in which both the actress and the character came out three years later. The gay envelope was pushed in 1998 with Will & Grace on NBC. Glee on Fox and Modern Family on ABC launched in 2009 and moved the LGBT Trojan Horse beyond society’s heavy closed gates of acceptance, enabling families throughout America to see bullied outcasts become the real cool kids in high school and a gay couple adopt and sweetly raise a child as part of a loving extended family. President Barack Obama says Modern Family is one of the Obama family’s favorite TV shows. 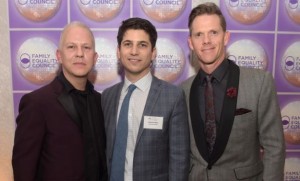 But as out Houston Mayor Annise Parker and executive director Gabriel Blau (pictured above with Ryan Murphy and David Miller, event co-chair) also made clear, there’s still much work to be done. Parker is still fighting for her city’s acceptance of the Houston Equal Rights Ordinance and Blau reported that FEC is submitting their Voices of Children amicus brief to the Supreme Court this week in advance of the Court hearing oral arguments on marriage equality this April.

“I no longer go around saying that there is no such thing as a ‘gay agenda,’ because there is a gay agenda,” said Parker  after accepting the FEC honor presented by Normal Heart actor and fellow Texan Matt Bomer. Parker, the first out mayor of a major US city, married Kathy Hubbard, her partner of more than 20 years, in a Palm Springs ceremony on Jan. 16, 2014. The couple are raising three children together, two adopted girls and a son who she said looks like Trayvon Martin after the African American teen was shot dead.  Recently Parker was named the top mayor in the U.S. by the City Mayors Foundation.  “The ‘gay agenda’ is to be able to attend school safely without fear of bullying,” Parker said. “The gay agenda is to be able to raise our children lovingly with the full protection of the United States.”

“Our life is full of filling out forms — at the doctor’s office, at our children’s schools, at their dance classes. The forms that we’re presented with at every turn still don’t reflect us — or many of today’s families,” Blau said. “But now there’s an app for that. This app will make it possible to bring hundreds of forms to our attention, and for LGBTQ parents on the front lines across the country to work with our staff and make these changes on the ground.”

Read the full article in Frontiers Media by Karen Ocamb at: https://www.frontiersmedia.com/frontiers-blog/2015/03/02/family-equality-council-honors-glee-modern-family-and-the-normalization-of-lgbt-families-video/ .