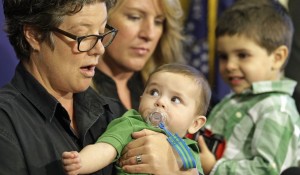 Most of the children of gays and lesbians who have filed court briefs in same-sex marriage cases say their parents’ inability to marry has deprived them of legal protections and hampered them from living their otherwise typical lives.

But four adult children of gay parents — acting as a “quartet of truth,” according to their lawyer David Boyle in Long Beach, Calif. — have submitted briefs to the 5th U.S. CircuitCourt of Appeals opposing same-sex marriages, with several saying that growing up under the rainbow was neither normal nor pleasant. The court, which is considering whether to uphold the man-woman marriage laws in Texas, Louisiana and Mississippi, will hear arguments in New Orleans on Friday.

These testimonies “really represent what we hear” from families and children, Gabriel Blau, executive director of Family Equality Council, said this week.

Their “voices of the children” brief especially resonated last year with 7th CircuitCourt of Appeals Judge Richard A. Posner.

It contains “a great deal of rather harrowing information about the problems that are created for children and their parents” when same-sex couples are not allowed to marry, said Judge Posner, who went on to write the unanimous ruling overturning Wisconsin’s and Indiana’s laws banning gay marriage.

Judge Posner clearly saw that harm occurs “when we don’t protect all of our citizens in the same way,” said Mr. Blau, who has been with his husband for 12 years and has a son.

Read the full article at the Washington Times by Cheryl Weltzstein at: http://www.washingtontimes.com/news/2015/jan/8/gay-couples-children-oppose-same-sex-marriage-tell/?page=all .